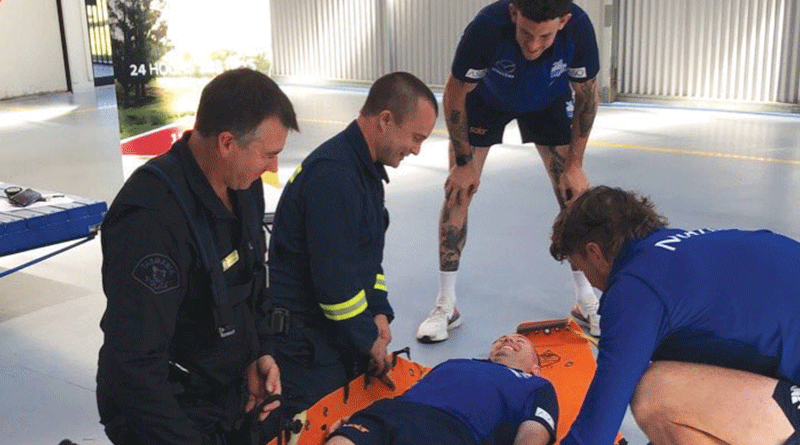 WESTPAC Rescue Helicopter Tasmania has announced a new community partnership with North Melbourne Football Club to continue to raise its profile and importance within the community.

North Melbourne Football Club players Nick Larkey and Jasper Pittard, along with North Melbourne’s The Huddle program’s chief executive officer Cameron McLeod, were given a unique behind the scenes tour of the base.

Westpac Rescue Helicopter Tasmania chair Tony Harrison said the partnership would broaden the reach of its services and fundraising activities to North Melbourne’s membership base, sponsors and players.

“This is the start of what we believe will be a very valuable relationship for us,” he said.

“We ran them through the whole program we do down here, with the police, ambulance and medical people explaining exactly what they do and showing them the helicopters at the base.”

Mr Harrison said Westpac Rescue Helicopter Tasmania was an essential service that was involved in search and rescue operations around the state, with crew members consisting of Tasmania Police, Ambulance Tasmania and Rotorlift Aviation.

“We rescue people lost in the wilderness to fishing boats offshore and road accident victims, and our services are also used to transport medical patients between hospitals in the state,” he said.

“While the helicopters are funded by the State Government through the Department of Police and Emergency Management and Ambulance Tasmania, our role is to raise additional funds to provide training and specialist equipment to go on the helicopters so we can have a world class aerial medical service.

“Our fundraising part of the organisation is completely voluntary, so we’re aiming to increase donations from the community and look for other corporate and commercial sponsors to enhance our services.”