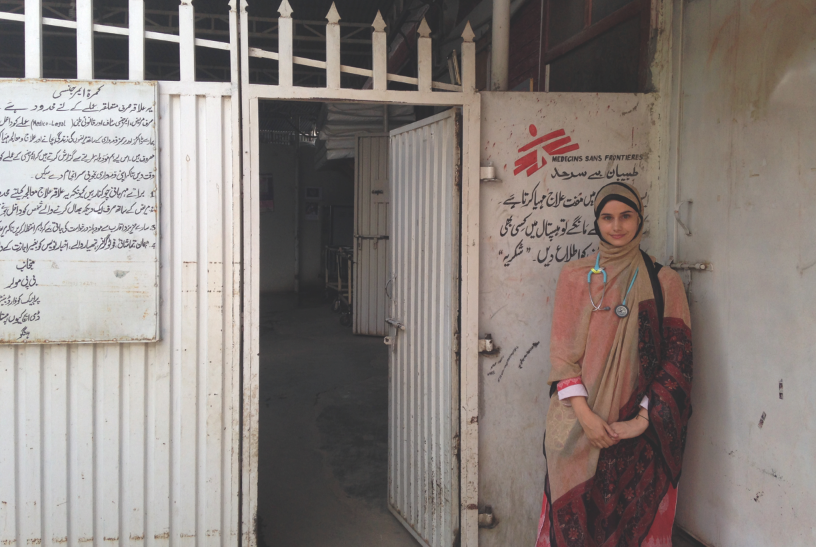 FOR most people, travelling to a country or an area classified as “dangerous” is an unthinkable act.

But for Emma Clark, of Hobart, it is “all part of the job.”

Ms Clark is a University of Tasmania graduate who has been working as a medical doctor for seven years.

In English, Médecins Sans Frontières (MSF) translates to Doctors Without Boarders, which represents the organisation’s ethos.

MSF supports more than 24,000 field staff daily who provide assistance to people caught in crises around the world.

Ms Clark, who recently returned from her second MSF assignment to Pakistan, said she decided to become a doctor so she could work for the organisation.

“MSF is an organisation that does not have any political or religious ties.

When I first learnt about the work it did I knew I wanted to be a part of it,” she said.

“I completely identify with MSF’s philosophies – both professionally and personally.”

Ms Clark worked as the head of the emergency department and newborn wards at a hospital in Hangu Pakistan.

“This area of Pakistan is a bit of a cross-point of different cultural and religious groups,” Ms Clark said.

“There is lots of domestic and sectarian violence there too and as it is on the North West, there are also many Afghan refugees and displaced people.

“I ran the emergency room and referred people to surgery. I also worked on the maternity side of things as there are a lot of bad birthing practices in that area and really sick little babies.”

Ms Clark, who spent three months at the hospital, was on call 24-hours-a-day.

“During this assignment there were eight expatriates and one other Australian, but most of the employees at the hospital were local,” Ms Clark said.

Ms Clark said education was central to her role in Pakistan.

“A crucial element of the assignment was to teach the Pakistani doctors, nurses and hospital staff and to encourage them to improve their medical practice,” she said.

“When working in different country it is important that our work is sustainable.

“Working without educating can do more harm than good. I think the Pakistani staff were really receptive to the knowledge we had to offer.”

Ms Clark has also worked in the Philippines following the destruction of Typhoon Haiyan.

She said the culture shock MSF staff experienced during the assignments was something one could never completely get used to.

“We are all human. I was scared before I left to go to Pakistan and I was scared when I got there,” Ms Clark said.

“But it was also such a rewarding experience. From a medical point of view it was extremely interesting and confronting, and I felt challenged on a professional level every day.

“There are cultural differences that are often hard to understand, but the staff and patients were generally very respectful and extremely thankful for the help we were providing.

“Every night I went to bed feeling like I had helped someone and that was really rewarding and fulfilling.

Ms Clark will now spend the next year working towards her emergency specialisation at the Royal Hobart Hospital before her next MSF mission in 2016.

For more information about Médecins Sans Frontières or to learn how you could support the organisation’s work go to www.msf.org.au