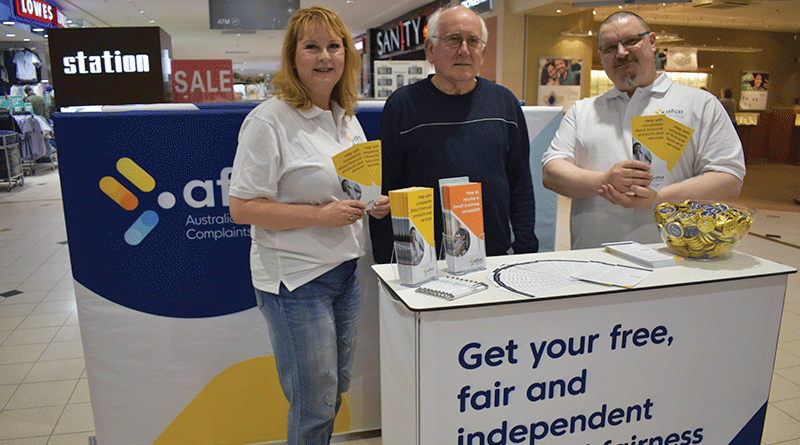 HOBART residents with issues with financial service providers were given a chance to talk to experts as part of the newly established Australian Financial Complaints Authority’s (AFCA) Financial Fairness Roadshow.

AFCA is a not-for-profit organisation that was established in November last year to deal with complaints people may have regarding their finances.

“It doesn’t cost anything for people to use us, but the benefit is we can help sort out a complaint that could have been stuck for months, even years.

“For a lot of people, it relieves the stress that they’re not fighting a big organisation.”

The Financial Fairness Roadshow was launched in Hobart in September, with the first stop being Eastlands shopping centre where 25 financial fairness checks were conducted for Hobart locals.

Consumer credit insurance, financial difficulty and the service provided by financial advisors were some of the main concerns raised with AFCA, whose jurisdiction includes complaints against banks, credit and insurance organisations, investments, financial advice and superannuation providers.

Local resident Bob Morris said he was relieved to receive face-to-face guidance for what can be a confusing issue to navigate.

“Having heard the tail end of David Locke’s [AFCA chief executive officer and chief ombudsman] radio interview, I thought I’d come down and chat to someone in person,” he said.

“I’m concerned about the service I’m receiving from my financial advisor given the level of fees I am paying.

“Having spoken to AFCA, I now feel confident in pursuing some resolution.”

Mr Locke said hearing from communities like Hobart first-hand was an invaluable exercise to raise awareness of AFCA’s services and gather insights that help improve processes and drive industry change.

“AFCA was created as a one-stop-shop for people to gain free, fair and independent help with any complaints they have with financial providers, but in reality, most Australians don’t know that we exist,” he said.

“The roadshow set out to change this because it’s important that all Australians feel confident in bringing their financial complaints forward.

“Every conversation had in Hobart contributed valuable insight that will ultimately help us drive change and ensure fairer outcomes for all Australians.”

In its first 10 months of operation, AFCA has received more than 741 financial complaints from Tasmanians and awarded over $2.3 million in compensation.