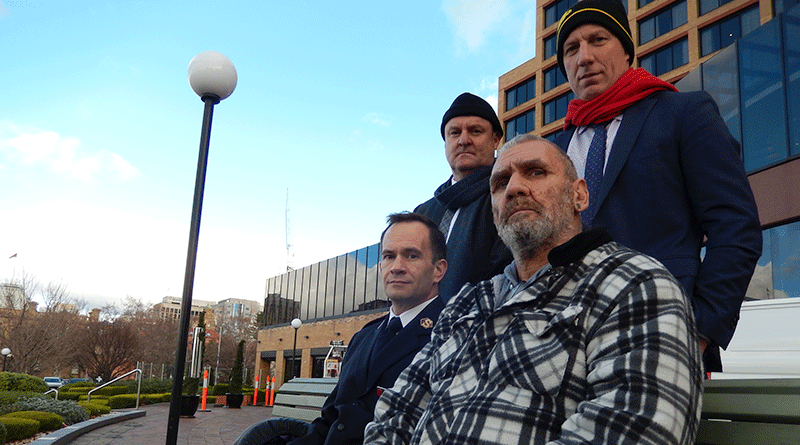 PEOPLE and businesses braved the Hobart chill this August to experience the challenges that people facing homelessness endure every night.

On 8 August, a sea of swags scattered the Hobart Grand Chancellor Hotel courtyard as part of the annual Salvos Sleep Out event.

Now in its 10th year, the Salvos Sleep Out aimed to raise $60,000 for the Street2Home community outreach program for homeless people in Hobart.

“Street2Home is the only primary care program that operates in Tasmania that actually goes into the parks and streets and meets people that are homeless and gets them into services,” Salvos public relations officer Major Brad Watson said.

Major Watson said homelessness was a massive problem in Tasmania, with more than 1,600 people currently homeless.

“If you can imagine just how cold it is and then how living with it impacts on physical and mental health and your ability to function,” he said.

“It’s a problem that impacts our mental health services, our emergency departments and our prisons, so to be able to address homelessness actually addresses a whole heap of other issues in society,” he said.

The program is solely funded by the Salvation Army Sleep Out, with all profits raised going towards ensuring there are more support workers on the ground, connecting Hobart’s homeless with essential service providers.

Street2Home client David Mowbray said the program benefited him greatly after spending the past three years on the streets.

“Before the Salvos gave me a swag, two blankets a night were given to you to sleep on and it’s so cold in Hobart – you just freeze,” he said.

“I’m now in Bethlehem House, so I’ve got a roof, a warm bed and meals everyday – I’m happy.

“Programs like this is what we need and we need to get it across to people that are in their homes at night.”

“When you’re on the streets there’s nothing – nowhere to stay and it’s so cold in Hobart,” he said.

“If you can get people off the streets for a week or two it really helps.”

Tim Wass from Knight-Frank Tasmania participated in the Salvos Sleep Out event for the first time.

“I’d heard from others that it was quite confronting, and it was an eye-opener,” he said.

“I don’t know if you could prepare for it, but I made sure I was rugged up on the night and talked to other people who had participated.”

Donations to the Salvation Army can be made at www.salvationarmy.org.au/salvossleepout.