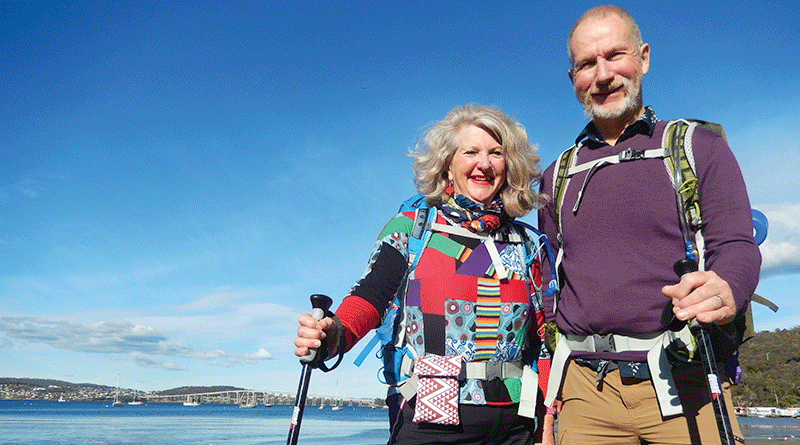 THEY have conquered some of Hobart’s toughest walking tracks, but New Town couple Kaye and Paul Gilhooly will face their biggest challenge yet when they attempt to hike the Via Francigena from Canterbury to Rome.

On 22 May, Mr and Mrs Gilhooly departed Hobart to commence their three-month journey across rural England, France, Switzerland and Italy.

The Via Francigena was an old pilgrim route in medieval times that connected Canterbury in the United Kingdom with Rome in Italy, and it has recently become a popular walking track.

It covers four countries and more than 2000 kilometres, including the Alps.

“Our inspiration was from Bishop Sigeric, who walked the route in 990AD to receive his pallium from the Pope, which signified him become Archbishop of Canterbury,” Mr Gilhooly said.

The trek will not be a religious pilgrimage for the couple, but instead a time of reflection, conversation and adventure.

“We’ve travelled a lot in the past and there’s something really nice about travelling slow,” Mr Gilhooly said.

“You experience so much more when going slow, and it gives you a time to reflect on life and just enjoy yourself.”

Mr and Mrs Gilhooly plan to walk around 22 kilometres each day, with a few rest days in between.

Mrs Gilhooly, who has osteoarthritis in her knee, said she was not going to let the challenge daunt her.

“A lot of people slow down when they get older and they don’t live a full life,” she said.

“For us, the walk is about living a full life, not agreeing to be old and that you can do things – it’s good to get out, experience life and not be afraid.”

Mr and Mrs Gilhooly, who are 61 and 58 respectively, trained regularly leading up to the walk to build up strength and stamina.

“We’ve been training with our boots and packs for about the past four months,” Mrs Gilhooly said.

“We weren’t long distant walkers, so we started walking about eight to 10 kilometres and kept increasing it to 20 kilometres on Saturdays – we feel pretty confident now.”

The two adventurers expect to face a lot of challenges, such as language barriers and catering for their vegan diet.

“We know that some days we won’t be feeling happy or smiling, but if it’s not a challenge we’re probably not pushing ourselves,” Mrs Gilhooly said.

“The challenge adds to the enjoyment and the sense of satisfaction.”

Caption: Kaye and Paul Gilhooly are gearing up for an adventure of a lifetime when they hike the Via Francigena from Canterbury to Rome.