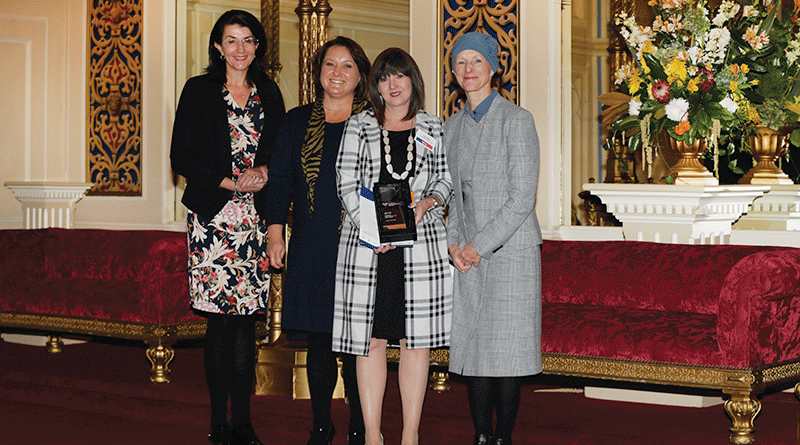 HOBART’S volunteers have been thanked for the valuable contributions they make to the community at a ceremony held at Government House as part of National Volunteer Week.

The 2019 Tasmanian Volunteering Awards signified the start of National Volunteer Week from 20 to 26 May, with winners being announced in 10 categories.

Two Hobart-based volunteers received awards for their outstanding work, with Shelley Miller from Athletics Tasmania receiving the Bulk Nutrients Sport and Recreation Award and Tasmanian team leader for Share the Dignity Tania Watson being awarded the 2019 Premier’s Volunteer of the Year Award by the Hon. Jacquie Petrusma MP.

Ms Watson said she was grateful that her work with Share the Dignity had been recognised.

“I think there are so many wonderful volunteers out there that do an amazing job, but I was very honoured to be picked over the 220 volunteers that were present at Government House,” she said.

Share the Dignity is a not-for-profit organisation that began in 2015 and is run by a team of 70 volunteers led by Ms Watson.

The aim of the organisation is to collect and distribute essential sanitary items and other necessities to 57 local charities that support women in Tasmania experiencing homelessness, domestic abuse or financial hardship.

“Forty three per cent of homeless people in Australia are women, so it’s important we are able to provide them with the essential items to keep them going,” Ms Watson said.

“I believe no woman or girl should go without these basic necessities.”

Ms Watson balances her volunteering with working full time as a teaching assistant in literacy support and studying for her associate degree in education.

“I think it’s important that people give back to the community because you never know when there might be a time you may need help from an organisation, and it’s a very rewarding thing to do,” Ms Watson said.

“The more people that volunteer and give up the time, the more we will be making our community a better place.”

“The impact of volunteering goes far beyond the gift of time from one person to another, it strengthens the social fabric of entire communities,” she said.

Hobart Lord Mayor Anna Reynolds said the awards were a way to celebrate and show appreciation to community members who chose to give their time to help others.

“We have so many generous and passionate people in our community who go above and beyond to help make our city a great place to live,” she said.

“Whether it is through providing direct support to those who need it, fundraising for a variety of important causes, or simply making Hobart a better place to live, we owe so much to our city’s volunteers.”

Across Tasmania, around 160,000 people donate their time to volunteer work, contributing an estimated $4.9 billion worth of voluntary service every year.

For more information on Share the Dignity, visit www.sharethedignity.com.au.