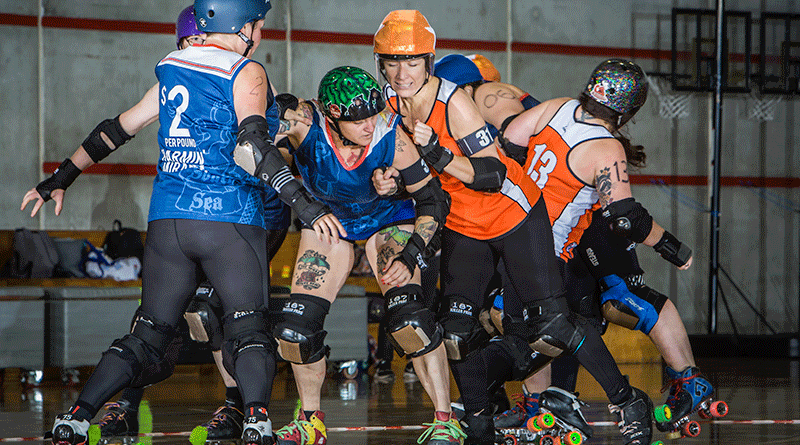 TASMANIA’S largest roller derby club, the Convict City Rollers, has put on the skates to celebrate its 10-year anniversary this August.

To mark this milestone, the Convicts will play against a roller derby team from Geelong who were the first team to travel to Hobart in 2010.

The games will then be followed up with a party at the Brisbane Hotel where the new Convicts logo will be revealed.

Earlier in May, the Convicts hosted a day of roller derby in Hobart as an opportunity to allow the four Tasmanian roller derby clubs, including the Van Diemen Rollers, Devil State Derby League, South Island Sirens and the Convict City Rollers, to play against each other.

While most teams were playing for experience, the South Seas Roller Derby Club from South-East Melbourne flew down to play an internationally sanctioned game against the Convicts’ travel team, known as Orange Thunder.

Orange Thunder captain Alabama Hurley said the game against the South Seas was highly competitive with both teams looking to increase their international ranking.

The Convicts team ended up as eventual victors.

“We’re currently ranked ninth in the country out of a couple hundered teams and are ranked 110 internationally,” Ms Hurley said.

With the Convicts in their 10th year, Ms Hurley said the club had more than 120 members, ranging from juniors through to seniors, and competitive through to recreational skaters.

“We have a very inclusive community, we’re welcoming, and we’re gender diverse,” she said.

“We‘ve got people from all different cultures, backgrounds and sexual identities, so there’s something for everyone.”

Ms Hurley said the team was constantly improving and hoped to continue their climb up the ranking.

“I still learn things every time we train and play – the level of skill just keeps going up across the country and across the world, so it forces us to get better,” she said.

“The sport is always evolving, and because you’re rolling around knocking people over on roller skates there’s always something to learn skill-wise and strategically.”

The Convicts City Rollers caters to all levels of skaters and welcomes anyone who wants to join.

“It’s a great way to keep active and fit while having fun at the same time,” Ms Hurley said.

“It’s very empowering to play an all-female sport and be surrounded by so many women who are really passionate about a shared set of goals and having fun.”

Following its 10-year anniversary, the Convicts team will travel to Queensland for an event in October.

Caption: People had the opportunity to witness some of the action at the roller derby held in Hobart in early May. Photo credit: Liam Mitchell.