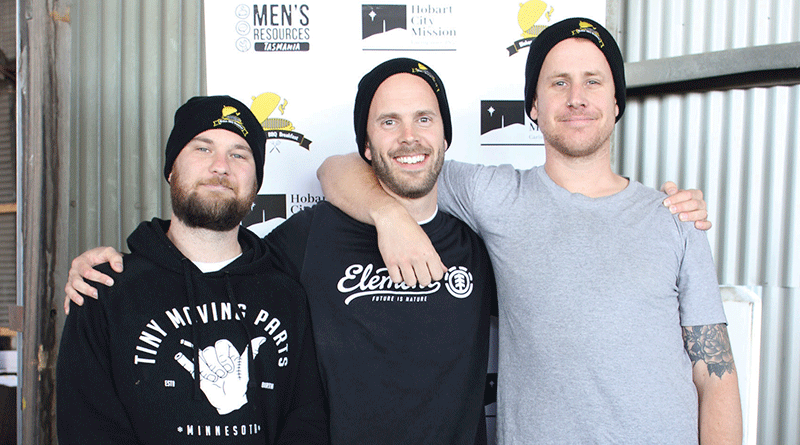 MORE than 150 hungry Hobartians have chowed down for charity, tucking into a fundraising fry-up as part of International Men’s Day.

As they dined on egg and bacon rolls, burritos and waffles, guests were treated to a live performance from ARIA Award-nominated Tasmanian band Luca Brasi, and were inspired by a motivation speech by world-beating Tasmanian-born ironman champion Matt Bevilacqua.

Men’s Resources Tasmania president Jonathan Bedloe said the breakfast gave men and women alike the chance to talk about concerns affecting the wellbeing of men and boys in the community.

“International Men’s Day provides an excellent opportunity to celebrate the good things about men, and to share issues that are important to men,” he said.

“At Men’s Resources Tasmania, we feel that men are often not included in conversations regarding their wellbeing or fatherhood, and this is reflected in a lack of targeted, male-friendly services, or male perspectives in some policy areas.”

Hobart City Mission marketing and communications coordinator Anita Wheeler said the DIY Dads program and Men’s Resources Tasmania both relyed on the generosity of the community, with fundraising events like the Blokes BBQ Breakfast vital to its survival.

“So, the money will literally go towards keeping the doors open, allowing more men to go into the program each year.”

The first Blokes BBQ Breakfast, which also featured a silent auction and the chance for men to speak with local service providers, was such a success that organisers hope to make it an annual event, held on International Men’s Day each year.