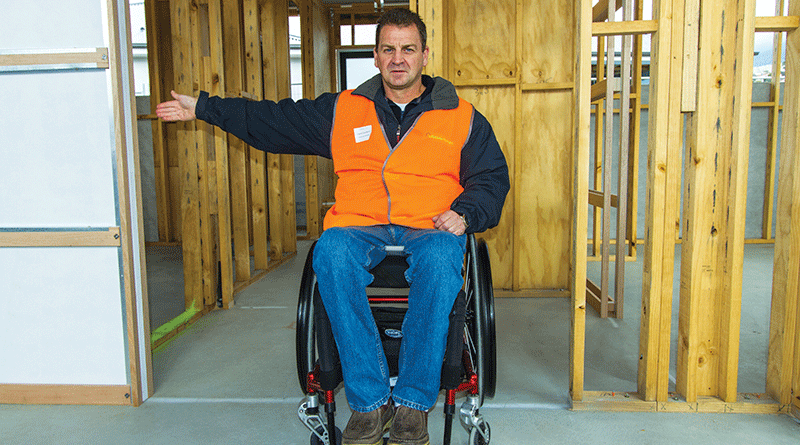 TASMANIA’S first universal access home specifically designed for easy living for people with disabilities or those planning retirement is now under construction in New Town.

Spearheaded by local builders Sharon and Peter Overton of Lifetime Homes, the frame stage has been completed and was recently opened for viewing by members of the disability community and local, state and federal government representatives.

Peter Overton, a builder with more than 20 years’ experience, said he believed homes should be built above the minimum standard and be suitable for all ages and abilities.

“That is why we have designed this home, which we call the SmartHome, to the platinum level of the Livable Housing Design Guidelines,” he said.

The SmartHome has more than 30 accessible features for those with a current disability, as well as built-in features that can be activated if needed at a later time.

Some of the features include wider doors and hallways, reinforced bathroom and toilet walls for grab rails to be fitted, kitchen design and finishing, switches and power points, door and tap hardware and assistive technology voice and touch controls to operate equipment and fittings.

These are the kind of features that leading disability campaigner and Chair of Paraquad Tasmania David Cawthorn has been campaigning for.

“Homes built now should have features that can be adapted as people get older or become disabled, rather than traditional homes where it costs a fortune to try and adapt.

“We commend this company for its vision and drive to create a modern home that is attractive, as well as functional.”

Sharon Overton said the cost to the homeowner of including key livable housing design features would be 22 times more efficient than retro-fitting when an unplanned need arose.

She said this would be a home for all stages of life.

“It gives the owner the option to stay forever and not have to go to a retirement home or care facility,” she said.

Public open days will be held in the coming months.

The display home is located in the new subdivision “Garrington Park”, which was the former K&D Brickworks, at 110 Giblin Street, New Town.

STUDENTS and staff at Ogilvie High School braved the shave in September, raising a massive amount of money for charity

Walking for Celia and Walking4BrainCancer